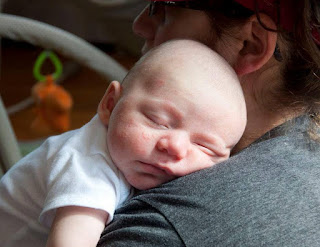 I often feel guilty about one aspect of how we're handling Dash, even thought I shouldn't.

Ann's been exclusively breast feeding this whole time. Not a drop of formula, it's been great on our wallet and great for Dash. This means, though, that Ann's more or less the exclusive feeder of the family. I get bottles from time to time, but her giving me bottles means she has to pump more, and the more that she pumps means the more she makes, and so on and so forth.

Also, Ann's done with work. We're taking the dive in on the whole one person working, one person with the baby thing, and it's working well for us. Since I made more money, I got to keep working (it would have gone the other way if Ann was the primary breadwinner). We plan to homeschool in the future, if it will work for Dash, and so this is kind of the beginning of "let's see how this goes." So I work during the day, and Ann's got the baby.

When we put it all together, it comes down to getting up at night that's the big thing. Since Ann is the prime food giver, and since I can't do much, she pretty much is the one who gets up at night, leaving me to sleep so I can be more alert during the day. On one hand, I can't complain too much, since I get off the hook. It's her viewpoint that if I can't do much for him at night if he's hungry, and one of us can get a decent night's sleep, then that's how we should do it, especially since I'm working. On the other, that's exhausting for her, and I can tell. She never complains, and she's a saint for doing it, but I definitely feel some guilt.

Compounding it is the line of questioning from people. Everyone's first question is "how's the sleeping going," which is cute and fun but puts us in an awkward spot since pretty much everyone else we know shares the nighttime duties. Then again, nearly everyone we know has a two income household, and nearly everyone we know went to formula pretty quickly. And nearly no one we know is planning to homeschool. So we're not doing much of anything like anyone else, so why feel insecure about it?

This is not meant to make anyone feel guilty about perhaps asking us that. It's a natural question. Just know that if we're a little apprehensive or do the nervous laughter thing, it's because we're just still trying to get comfortable with the roles we've set up for ourselves.
Posted by Jeff Raymond at 7:30 AM