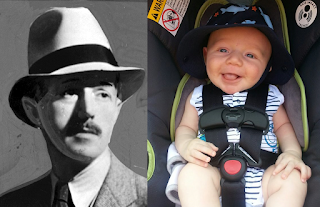 On one side is Dashiell Clark, our little bundle of joy. On the other, Dashiell Hammett, author and the guy who's name we stole for our son. We have placed them both in hats because hats are cool and to make it harder to tell them apart.

There is a definite divide that comes along with people learning Dash's name. Chances are, you're basically in one of three camps:

We mostly kept the names a secret throughout the pregnancy, in part because our friend did that and was happy with not getting a lot of reactions, and in part because we had more "settled" on a boy's name (our first choice for a boy name ended up not being so good for a lot of reasons), and in part because we still hadn't 100% committed to a girl's name by the time the due date rolled around. This is not to say we're using "settled" negatively in this case, because we did genuinely like the name. It's just that no others came around to really debate in our heads.

Now, we really don't care at the end of the day if people don't like the name. My mother, famously, wouldn't even say the name until the last week or so (we think she might have thought we were calling Dashiell (Dash-uhll) an "asshole"), but others have noted somewhat interestingly that they feel the name will have to grow on them a bit. I'm more than fine with that, for the record - it's not a modern name. It's just an interesting reaction.

What's fun are the people who do get the reference, because it's exciting for them given how rare the name is. I've had more than my share of shared moments with librarians and such who know the name. What's more interesting, though, is that his nickname, Dash, has more or less taken over. I didn't expect to call him Dash much at all, but it just...fits. He's a goofy little derpface, so of course we're going to call him Dash. Or Dashypants. Or Dashydoodle. Or whatever else Ann comes up with.