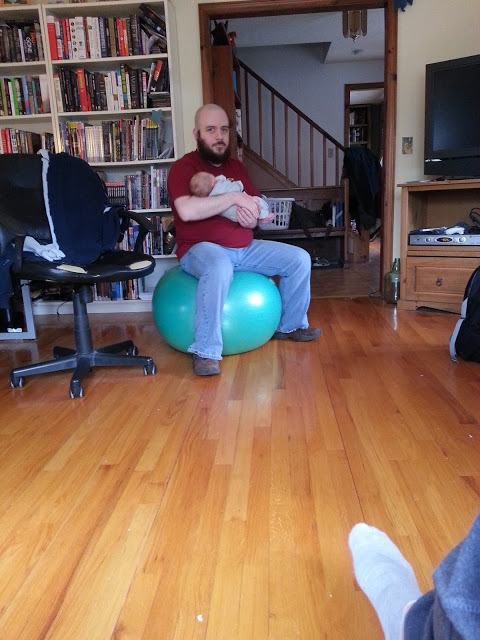 Back when Ann was pregnant, there was really only one thing I truly needed to buy for her, and that was a yoga ball. She wanted it for the delivery room, but also for her back and stuff during the worst points. It was an adventure getting the thing blown up, but we're all set with it now.

What's funny about this yoga ball is how attached Dash is to it. For the first few weeks of his life, we literally could not get him to go to sleep without us sitting on the yoga ball, bouncing endlessly up and down until his eyes shut for good. It was bizarre and annoying, but hey, whatever it takes to get a baby to go to sleep, right?

I thought this era was done, but it turns out we're far from it. In the last two weeks in particular, he's pretty much not going to sleep unless he gets some yoga bouncing in first. The kid's heavy now! Yoga ball bouncing is serious business! And yet we both continue to bounce over and over and over...
Posted by Jeff Raymond at 10:21 AM