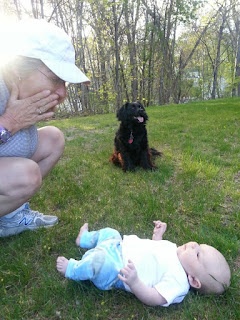 For those who might not have followed just yet or are coming to the blog late, about a year and a half ago we moved back into my childhood home with my parents to help take care of my mother. She was diagnosed with Alzheimer's in 2007, and living with her could really be an entire blog in and of itself. It is a scary, sad, bizarre disease that ultimately seems to hurt everyone except the person who's stricken with it, and it does not make life easy.

I had a lot of early apprehension about having a baby with Mom in the house. When it's Ann and I, it's a full time job with her as is, and adding a baby to the mix seemed to be crazy. Plus, without knowing how Mom would react to having a baby in the house? How we would be able to handle it, both as a couple and as parents? I had a lot of concerns. What I do have to keep reminding myself constantly, and what I needed to be reminded of when we started talking baby, is that my mother wouldn't have wanted me to change my entire life around her. She even said so herself early on when we had nearly moved into our condo in New Hampshire and I was starting to immediately have regrets about being so far away. Would she have wanted us to wait on having a baby on her account?

Obviously, we dove in and had the baby. What I'm not surprised about is how well Ann and I have handled it. Having a new focus, having a little meatball who is 80% joy, 15% frustration, 5% bodily fluids, it ain't bad. What I am surprised about is how Mom has handled it. Sometimes, when the baby is crying, she soothes him from the other room, talking to Dash as if she's right there (a common thing with Mom is to talk to people she perceives nearby, regardless of where they are). Sometimes, she comes and sees the baby and just babbles to it. Sometimes just lets him hold her finger. Always, always, always, however, storms into the room regardless of the situation with the exclamation "Here's the Nanny!" (She decided she'd be Nanny long, long before Ann was even in the picture, which is interesting that it stuck with her). Mom has really only tried to outright hold the baby once or twice, and has mostly been afraid of that sort of physical interaction otherwise, which we're frankly okay with. On a whole, though? Mom loves the baby. Absolutely adores Dash even if the name isn't really doing the trick for her. Instead of a horror show, it's been better than the best case scenario.

What's become very interesting, however, is the last few weeks. I don't remember exactly when Dash started smiling at familiar faces, but it's always nice to be the first one to run over to his swing after a nap, and see that huge smile come onto his face when he recognizes you. Ann and I get smiles constantly, and who else does? My mother. HUGE, laughing smiles, which just eggs my mother on that much more, which then causes more smiles and laughter from Dash. They're like old friends getting together, neither really understanding the other or making any coherent statements to each other, but it's just crazy how well Dash has taken to my mother as well as my mother has taken to Dash. It's to the point where Ann can put Dash on the kitchen table, strapped into a bouncy seat, and leave Dash and Mom to chat while she makes dinner. It's crazy.

I get pretty upset from time to time knowing that Dash will never know my mother the way I did. It's hard enough that Ann only got a bit of what made her great, but Dash deserves more than that. It's worse to think that Dash might grow up early on with Mom being at her worst, and will only know my mother as an angry, incoherent mess. But when I see the two of them together right now? I wonder if Dash will get lucky in the lottery of life and end up being a good thing for my mother, and my mother a good thing for him. Even if the best case scenario now is the best we get later, at least we have this and we can tell him about how he made my mother's life a little brighter without even trying.

My father sometimes says to his family that this house needed something good in it for once. I hope Dash someday understands that, when we talk about something going our way, that we meant him on so many levels.
Posted by Jeff Raymond at 7:30 AM