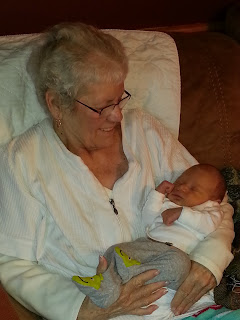 Raymonds of a certain age have traditionally gone through a childhood hazing ritual of sorts. It came from my Aunt Jane, an Aunt I was always close to growing up and loved quite a bit. She'd call on the phone and just say the dirtiest things to you (well, dirty-appropriate for the age). Potty humor, some light cursing, always just to get you a little angry and perhaps give it right back to you. I went through it, my brother went through it, my cousins went through it. Talking to my cousin Meghan the other night, I also learned that her son would get it as well.

Aunt Jane had been sick for some time, and largely because we've largely had our hands full on our own (along with other issues, for certain), we hadn't gotten around to see her in some time. With the baby, I made it a point to go and say hi, and it was like things had never changed, which was great. My Aunt and I caught up a bit, had a bunch of great laughs, and then she held the baby for a bit, and immediately laid into the little guy just like she did to everyone else. He was only a month old, so it's not like he'll really remember it, but I will, and it'll be a good story. Even in some of her most painful times, she was like she was 20 years earlier, putting whatever pain she was going through aside to put a smile on someone else's face.

My Aunt Jane passed away on Friday. I'll miss her terribly, and I'll be sad that, like a lot of other family traditions that slide away with the people who pass on, Dash won't ever get the full Aunt Jane experience. While there are a lot of people in my life that Dash won't really know, that he'll never know my Memere and that he'll never know my mother as she once was are hard. That he'll have to hear the crazy stories about Aunt Jane second hand hurts as well, because she was really special, and really something else.

Thanks, Aunt Jane.
Posted by Jeff Raymond at 5:00 PM