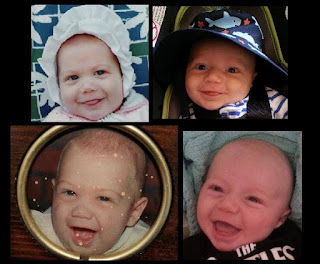 Very shortly after Dash was born, while Ann was still shaking it out on the hospital bed and Dash was getting weighed and measured, they told us how long he was and we were surprised: I tend to resemble a tree stump when dressed properly, and Ann, while slightly taller than me, is far from a giant. But Dash was in the upper percentiles for length/height, and so Ann and I immediately started making "I guess he really does look like the mailman" jokes. Our midwife (sense a pattern yet?) was not amused.

There's a common conception that the baby, upon birth, looks like the father for evolutionary reasons - in a situation where the father cannot be certain if the offspring is his, biology steps in. Science isn't as clear on this as I thought, I learned, but I still love the concept. Regardless, one of our biggest debates is who Dash looks like. I look at Dash, and see nothing but Ann except in the nose and his super-expressive eyebrows, which is a key skill of mine. She sees nothing but me in him, which she cites toward his actual eyeballs (not his eyes, which we both agree are all Ann) and face shape.

Regardless, Ann, I think, inadvertently put this debate to rest with the picture she put together above. Not only does Dash have her smile as a baby, but apparently Dash's little derpface is hereditary. When I saw this, it really blew my mind, because it's pretty crazy how close they look at similar ages.

If anything, it's confirmation of one thing: we can't rule out the mailman.
Posted by Jeff Raymond at 12:05 PM