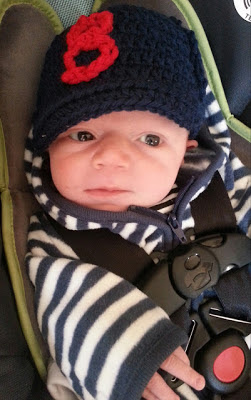 I was honestly hoping I could write this with a Stanley Cup game seven pending, but alas, it was not meant to be. What is apparently meant to be, though, is good things happening to our local sports teams when Ann and I reach milestones in our life:

* I met Ann in 2004, which was followed by a Red Sox World Series win (first in 84 years) and a Patriots Super Bowl win (third in four years).

* Ann & I got married in 2007, which was followed by a Red Sox World Series win and a Patriots Super Bowl loss after the 16-0 season.

* Ann & I moved into our own apartment again in time for a Bruins Stanley Cup and a Celtics Finals run.

* Dash was born in 2013, and we already have a Stanley Cup Final for the Bruins and the Red Sox are still hanging tough in what was supposedly a "bridge year."

I don't believe in superstition, in hype, in this sort of thing. We've spent a lot of time calling Dash our little good luck charm, though, and I'm secretly hoping the Sox win it all this year so we can tell him about how he kept the pattern going.
Posted by Jeff Raymond at 12:49 PM