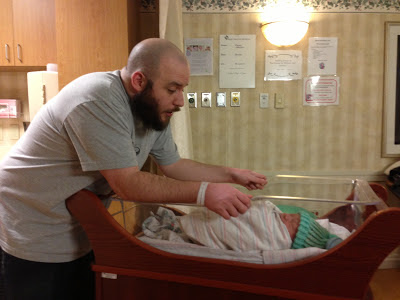 It was three months ago today that I actually felt like a dad for the first time. At least I think it was the following day, but whatever, it's still a nice story.

Ann was moved to the maternity ward, things have settled down, and Dash is with the nurses and doctors for some sleep and swaddling and what have you. I decide to go check on Dash, and I head on over.

St Vincent's Hospital in Worcester effectively LoJacks the baby with a bracelet on its ankle, and the parents get little wristbands with a barcode and a series of numbers on it so the babies don't get stolen or switched. So I head over, hop in, read off my information, and they bring me to Dash, who's not even a day old yet, laying in his rolling bed. The nurse then said "do you want to take him back to the room?" Okay, sure! Off we go!

I get back to Ann's room, and Christina and Beth are there, and the first reaction out of everyone's mouth? Not "how is he," or "what's going on," but "they let you take the baby?!?" As if a 32 year old man would be incapable of such a thing, or something. I faux-argued the point a bit, and moved on.

It's true, though, because that's exactly the first thought that came through my mind when they told me to take Dash back - they want me to take the baby? Really?

I read kids books for a living, I play dodgeball on the side and I get addicted to cartoons and pro wrestling and video games. I don't know if I'll ever feel like an adult. But that moment was when it actually became pretty real to me that I was actually a dad.