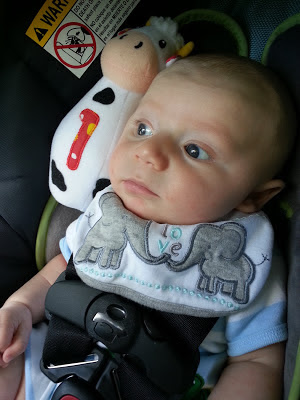 We talk a lot about how Dash being all puppies and sunshine and unicorns, but the fact of the matter is that there has been one issue that we've had to solve. Part of this is more than certainly due to the crazy birth situation, where Dash was perhaps a tad overcooked in the birth canal, but regardless of where to put the blame, it's something we've had to fix.

Essentially, Dash favored his right side. The left side of his head after birth was a little off early just because of the conehead properties, and wasn't too much of a concern, but this pretty much made Dash default to the right early. When we went to the pediatrician for his 2 month (or maybe 6 week, I can't recall which), she noted the necessity to fix this. We'd prefer Dash not be in a helmet, so we got on it.

A lot of it is easy to do - more tummy time, laying him down for naps in ways that force him left, sitting him so he has to look left to interact with us. We're to the point where his "hard left" is just about as good, if not as good, as his "hard right." As the image above shows, however, we've had to get inventive from time to time as well. During one significant car trip, for example, we just used his bovine bowling pin as a stopper to keep him from drifting off to sleep on the right hand side. He never seemed uncomfortable and he's been a good sport about it, but still.

So yeah. We're thinking things are good at this point, and I'm hoping his doctor doesn't come out and say "hey, here's your helmet, see you at Christmas," but for now? We're happy with his progress.
Posted by Jeff Raymond at 9:01 AM