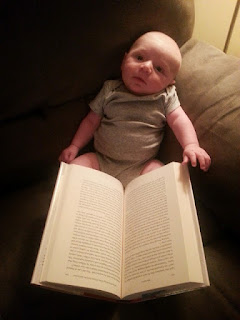 If you haven't noticed, we're a little book obsessed here at the Raymond Compound. I haven't held a job that wasn't related to publishing in some form since the beginning of college, so we've accumulated a lot of books anyway, never mind our library book sale scavenging. We're not completely beyond help - we did get rid of at least a third of our books when we moved to New Hampshire initially (some I now regret getting rid of, but that's another blog for another day), but we have a lot of books.

I sure hope Dash loves the printed word.

That's both a joke and a reality, though. I know all the relevant studies suggest the strongest, most voracious readers grow up in houses with libraries a fraction of the size of ours. And it appears that we aren't alone: polling suggests that parents actually prefer the printed books over their electronic counterparts right now. Granted, I love printed books as much as the next guy, but there's something about my pushing that on a kid that is in a borderline-all-digital world that doesn't sit well with me. And then there's the whole question of screens and kids, and how that matches up with the modern world, and then my brain hurts.

This is not a situation where Dash will have to choose. The landscape will be really different in a year and a half regarding ebooks and tablets and whatever else than it is now, and we're of a certain income level where Dash will be able to experience the best of both worlds. This has ultimately more become a concern about whether it's important for someone who'll basically be a digital native to lose some of that experience in favor of steering him toward old media, or whether I'll be doing him a disservice by ensuring his readiness for technology. I know kids pick up on this stuff quickly, but I also want to instill good habits now. The way I use a computer now has not changed terribly much in 20 years, even though the tech has, and I have a lot of negative computer habits. I also have a lot of good book habits, but a lot of not-so-good ones, too. I'm not sure I know how to set a good precedent early for him, nor do I know if it will ultimately even matter. 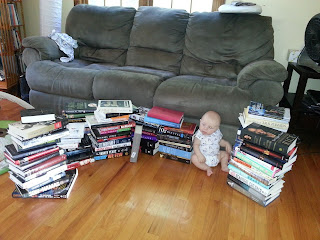 The other issue I'm kind of loathing is the appropriateness issue. I've talked about this a bit before, and when I was reorganizing some books on Sunday I realized that this will probably be an issue sooner rather than later. I wasn't going to pick up Stephen King when I was 10, but there wasn't a Fifty Shades in the house, either, y'know? My natural distaste for anything that feels like censorship is being overridden by the parental instinct I never knew I had, where I even fret over semi-discernible swear words on the car radio. I wasn't expecting this.

I suppose this is one of those things that will end up being dealt with regardless of my mental back-and-forth. Yes, I'm an overthinker, but when you want to simply do right by your kid, I'd imagine these are the concerns that pop up. I get the feeling my situation is unique because of all the books we have, it's more chances for Dash to expand his horizons and also perhaps trip up on something I'd prefer he wouldn't. At the end of the day, I guess I'd just like to avoid a whole Are You There God, It's Me, Dashiell thing. That's not so wrong, right?
Posted by Jeff Raymond at 9:00 AM