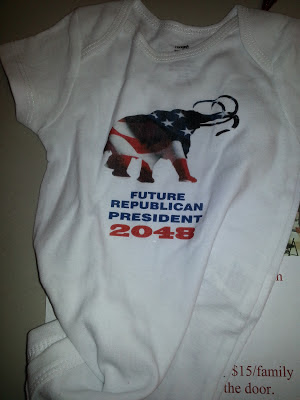 As many reading this know, and probably many others do not, I am very involved with local politics. Today, I'll spend the majority of my day as I've spent a good chunk of the last few weeks - making phone calls for the Republican candidate in the special election that's happening today. I'm the treasurer of my town's Republican Town Committee, and I've volunteered on a ton of campaigns over the last 5 years. I never want to run for office (okay, maybe library trustee someday), but I do enjoy helping elect other people. A gift from a fellow local Republican couple (and all around good people) Alan and Lori speaks to that, as evidenced above.

What I do struggle with a lot, though, is balancing wanting Dash to also feel like he can (and should) be involved and informed in politics while not creating a situation where he does what he does because dad does what he does. My father was a union Democrat, as was my mother, and I was raised believing certain things that I later found were a little more nuanced. While Ann will credit me with trying to present multiple sides to an issue as neutrally as possible when she has a question, I'm able to do that with her college educated adult brain in a way that might not be as simple for a kid.

I worry a lot about Dash being exposed to as much information as he'll need to make logical, coherent choices in his life, and politics is part of that. But how do I bring him to a Republican event and have him not brainwashed? Same with a liberal event? Being in such a left-wing state, will his default be skewed like mine was? I know I'm again overthinking the world that Dash will be in, not to mention assuming a lot about what the political landscape will be in a decade when this will actually matter, but the truth of the matter is that this isn't an issue of religion or finances, which can be avoided - he's going to play in a yard that will have a political sign in it, drive around in a car with multiple bumper stickers, and know a lot of extended friend-family who are just as active and activist for causes his father is not. I don't want him to be ignorant, but I don't want him to default to one position (in either direction!) simply because his parents are a certain way.