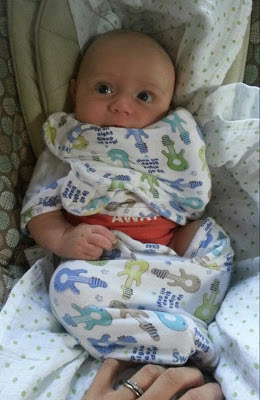 The image above is the results of a world-class swaddling attempt of mine that went awry. Dash does seem pretty proud of himself for Houdini-ing his way out of that swaddle. I've since gotten better at it.

Anyway, swaddling. I don't actually think I had any awareness of what swaddling was prior to our friend having a baby a couple years ago. It completely slipped my mind until Dash came along, and he loves being swaddled. I don't really get it, but it's to the point where, if he's getting fussy, we can lay him on his swaddler and he immediately starts grinning like a madman waiting to be swaddled. Also, they make special velcro swaddle sacks, which crack me up, as it assumes that we couldn't swaddle him without them, even though I know I can't figure it out.

I can't imagine anything more boring to read than someone figuring out how to swaddle, but I'm like this dude in the Samsung commercial, needing a YouTube video to figure it out just so the baby can crap all over himself the minute we've got it down pat.

In other news, I'm now that guy who relates to commercials as a parent. Please send help.

Babies are weird, I guess is my point. For a kid who loves to kick and wiggle and move around so much, the idea of putting him in a fabric strait-jacket and his liking it makes no sense to me. But so little of this makes sense to me to begin with, so why seek logic?
Posted by Jeff Raymond at 1:58 PM