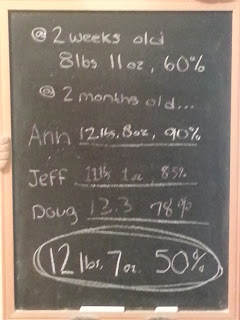 Dash looks absolutely massive to us. I know that's a little silly, but it's true. After he put on a pound and a half a week after he was born, after he started fitting into 3 month old clothes within a month of his birth, we just picture him as this giant baby that is much larger than everyone else's. We recognize that it's not true, but it's become a game in the Raymond Compound to guess what his weight and percentile will be before his appointments. I won the first round, but lost big in the second round (unless we use Price is Right rules).

I expect this tradition to continue for his next appointment.
Posted by Jeff Raymond at 8:00 AM