I've neglected this blog for a lot of reasons, and I need to get out of that and start really documenting some stuff here. So for the month of June, I'm going to offer up a post about Dash every day to kind of catch up on the backlog of things I've been thinking about, or pictures I haven't put on Facebook (or have and haven't discussed), or just random musings. Then, hopefully, I can look at a more regular schedule.

Anyway, for today, one of Dash's weird habits: 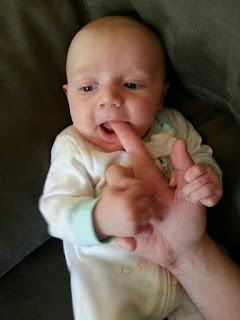 So Dash was off the binky relatively quickly. They kind of scared us off regarding pacifiers at the hospital, citing "nipple confusion" (which, for the record, Dash has no problems with). It turns out that, at least for the first few weeks, it was an easy soother for him, he'd spit it out when he didn't need it anymore, and that was that. We got excited, bought a few of the Soothies he liked almost immediately, and within a week or so, he didn't care for them anymore. Go figure.

One habit that he did enjoy in the hospital, and still does, however, is the gnawing of the finger. I don't know, it's really strange and all but he really enjoys it. He'll grab my finger and immediately bring it to his mouth, and once he gets it in there, he goes to town. He does it for a while, then he's done, no problem. He's not crazy when he doesn't get to eat my hand, he's not upset when I take it away. It's just a weird habit.

I'm sure a lot of you who've been through this are thinking "well, yeah, of course." This is just one of those things that no one tells you, I guess, and that leaves me constantly amused. And my poor finger sometimes hurts by the time he's done, but Dash is worth it.
Posted by Jeff Raymond at 7:06 PM