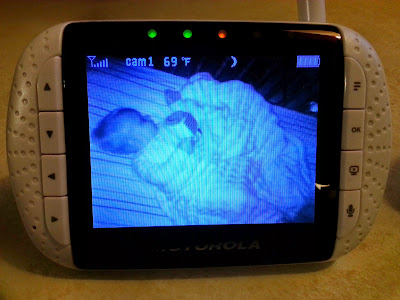 Longtime readers know the sleep problems we've had with Dash over the last year. The post then really just encapsulated the early issues, I never really got around to explaining how bad things got as we headed into the winter. Needless to say, even with a transition to the crib, having a four hour stretch where he didn't wake up was a victory for us, never mind any other options. The typical was every couple hours, maybe every 45 minutes.

This is, really, entirely our fault. Basically everyone told us to do the "cry it out" method, with others the modified Ferber method. For us, we just saw it as overly cruel. Yes, the science is basically in that you wouldn't do lasting harm, but who would want to let a child cry for the sake of crying while it's asleep in the crib? It's a baby! It doesn't get it! The baby wakes up, is completely confused by the surroundings that weren't there when it fell asleep, and reacts. We weren't on board.

The tide shifted significantly for us shortly after one of my business trips in January. Dash went about a week waking up every 45 minutes on the spot. Ann would be on night duty, so it was pretty much her trying to get the baby to sleep and me trying to get sleep so I can be some sort of useful during the work day. It was getting worse and worse to the point where he had a night where he had a number of 20 minute sleep rotations. At that point, we couldn't blame it on sleep regression anymore. Ann grabbed the Ferber book from the library, made a plan, and we dove in.

That night, he cried for 10 minutes and then slept eight hours.

I'm not going to pretend that the entire issue is solved. He still has a wakeup or two a night, he still needs to have his night feeding weaned, and he's a terrible napper even now, but instead of fighting with the baby from 8pm onward, having him interrupt meals and shows and company, he goes to bed at 6:30 after a pretty standard routine involving toys and puppets and songs, and he's basically sleeping. The molars that he's cutting have made the last couple weeks difficult, but we're miles ahead of where we were four months ago.

If anyone asked me now, I'd absolutely tell them to do the Ferber thing when appropriate. If not for the baby's ability to sleep, but just for basic parental sanity. The crying, for us at least, stopped so quickly that we continue to kick ourselves that we didn't just go along with it sooner.
Posted by Jeff Raymond at 7:30 AM