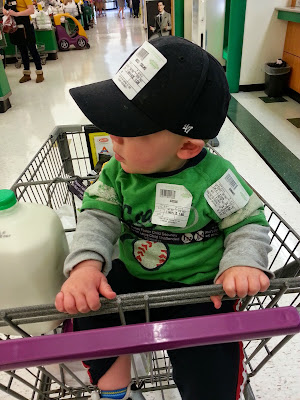 I'm still surprised that the most redeeming experiences in terms of Dash interacting with the world around him comes from the supermarket.

It's hard to point at just one thing with our supermarket trips, but one thing I didn't expect with a kid is that it might make mundane tasks more fun. I took him to Home Depot with me about a month ago and not only was he the star of the show there, but I brought him over to the ceiling fans (another obsession) and the look on his face may as well have been me taking him to Disney World or something. Just hilarious.
Posted by Jeff Raymond at 7:30 AM