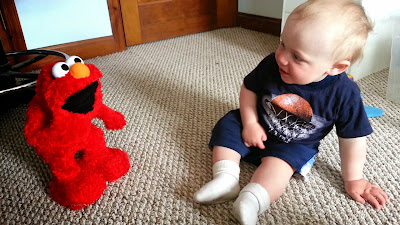 One thing they don't warn you about before you have a kid is how horrifying some of the toys are.

Pictured above is an Elmo doll of some sorts. Now, I should preface this by saying that Dash has not seen a minute of Sesame Street. We've basically kept him away from television/videos except for the occasional video on the phone or to distract him while Ann cuts his nails. Meanwhile, we ended up with this sort of Elmo doll that stands on its own feet, tells long stories, whips its head back like some Lovecraftian terror to laugh maniacally, and occasionally dances and squats. It's very interactive, too - if you squeeze its nose, Elmo farts. If it falls over, it asks you to pick him up.

So, so weird. So creepy. The whole experience is really unsettling, and Dash loves every moment of it. We've had to put it somewhere not easily accessible so it doesn't get used constantly. So odd.

There are a lot of toys like that. Dash loves this dog that's programmable that one of our friends got him for his birthday. I'm both impressed by the technology and annoyed that it won't say Dash's name right. There's a faux guitar that he enjoys as well that you can strum over the pickups and it plays (of all things) OK Go's "Here It Goes Again." There's this thing:


(He's gotten very good at this)

There's the singing piggy bank pictured below that is apparently the world's most popular toy: 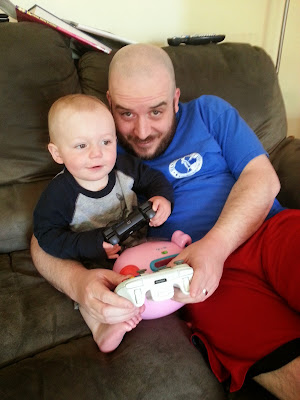 (Yes, I can confirm the "not plugged in controller trick" works)

I guess I'm just too old and jaded to really understand what's going on with a lot of these toys. He likes blocks and stuff, too, and I know we've just scratched the surface seeing as we've largely inherited a lot of these toys, but still...
Posted by Jeff Raymond at 7:30 AM