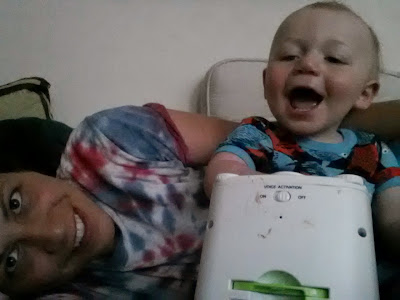 Last night was legitimately the worst night of sleep I've gotten in recent memory. I even slept better in the three hours that I got the night before Dash was born than I did last night. I was hot and tired and uncomfortable, it was just terrible.

I feel bad complaining about it, though, because, honestly, no amount of bad sleep can even begin to add up to the terrible sleep Ann has gone through over the last year with Dash, and she does so with such minimal complaint that she's really legitimately a superwoman. I don't really know how she does it.

We're not really the holiday types here. We treat ourselves a bit on birthdays, but that's really about it these days. Unless it's a milestone day of some sort, we've kind of moved past that sort of thing over the years. So Ann is in Philadelphia for Mother's Day, which is great, but it also serves as a pretty crazy reminder of how lucky Dash and I are, and how much easier she makes it on us. Putting aside everything she's done for my mother (which should never ever be diminished, ever), the stark reality is that I'm a mediocre father in a lot of aspects. She picks up my slack when I'm stressed out, she covers without complaint when I work less than convenient hours, she's sympathetic when I'm in a depressive jag. It puts more pressure on her when she's already dealing with Dash all day, and it's not unnoticed even if I do a poor job of showing it.

The dirty little secret, though, is that my problem with parenting at present is that I completely and totally lack any sort of instincts. Ann makes it look easy. Ridiculously so. She seems to inherently know what Dash wants and needs, and can just do it. I second guess myself constantly to the point where I feel amazingly victorious if we get to Home Depot and the grocery store over the course of a morning without incident. And the instincts haven't gotten easier, only Dash's ability to communicate what he wants. That makes it easier for me, but it's just a weird feeling for me to feel like I'm just not catching on in some regards. Ann tells me I'm doing fine, which is either an honest statement that I refuse to accept due to my miswired brain or her making me feel better, but either way, I just struggle with a lot of it.

So we're lucky. I know there are some pretty terrible mothers out there, and plenty of mediocre moms as well. Ann is a legitimate rock star. Much like with our marriage, we both fill in the gaps the other can't do, and it means that she's always teaching me about how to be a better parent, and it means Dash benefits so much from it. I'm sure Ann will read this and get mad at me for diminishing what I bring to the table, but I don't doubt for a second that the reason Dash is the personable, amazing little peanut he is stems from how amazing and personable his mother is. I'm a better person today because of her, and Dash is a great kid because of her. And she deserves all the credit in the world for it.
Posted by Jeff Raymond at 10:17 AM