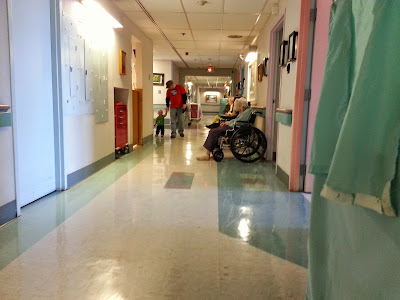 I guess it's impossible to post on this blog regularly without talking about Mom.

I can't remember the last update on this blog that I made regarding Mom. For a quick recap, she spent a few weeks in the geriatric psych ward of a local hospital in September, and ended up coming back home after that. October through the first few weeks of December were extremely difficult, with visiting nurses coming in twice daily and my mother being less and less cooperative even though she was spending her days at an adult care facility. Finally, in December, after two weeks of her sleeping only from 8pm to around midnight, we opted to ask the group we work with for a respite stay to get ourselves back on track a bit. It turns out that she was so bad for them that they were going to ask us if we'd be okay with a respite, so that worked out.

I don't want to talk too much about the first place she ended up. It wasn't a positive situation for anyone involved - we weren't happy with a lot of what was happening on all ends, and (more importantly) it was far too noisy for Mom to really exist in a calm, peaceful manner. It was really kind of ridiculous for her, and her condition worsened as a result, including a lot more in the way of violent aggression. She made some trips back and forth to the hospital, but we finally got her transferred out to a different facility, and she's doing a lot better there.

From a basic "visiting your not quite 60-year-old mother in an Alzheimer's ward" standpoint, she's really doing the best she has been since maybe October or November. Not terribly angry, but basically not really with it, either. She's pretty much consigned to a wheelchair all the time now, just as much for her safety as it is everyone else's, but if she's at all aware of her surroundings or even if we're there anymore, it's not obvious or even implied. The good news is that her floor is pretty quiet and she has some really attentive people there with her. That helps.

At this point, Ann and I take Dash up to see her once to twice a week. Between work and Dash's bedtime, it's fairly difficult to get up there more often than that, but a lot of that has to do with the fact that you're visiting someone who really doesn't seem to know or care that you're there. You want to visit because it's the right thing to do, but it almost seems futile. Thus, we bring Dash. Why? Mom, for whatever reason, still likes seeing the baby from time to time. A few weeks ago, she even popped out an "It's Nanny!" line outside of her typical incoherent babbling. We were pretty shocked by it, but since Dash seems to make it a little better from time to time (and allows everyone a little break), he comes along.

Dash will take our hand and do laps around the center, too, charming nurses and patients alike. You obviously can't let him out of your hands with these types of patients, but it's also an open, round space that allows for some safe exploring. The nurses love him because he's a little guy with a big personality, and a lot of the patients love him because who doesn't love a baby? One woman constantly tells us that she's going to call him "pumpkin," another is reminded of all her children. It's kind of nice - I feel like Dash is making a difference in these people's lives in some way.

As for Mom, without too much speculation we know that this is probably going to be her final stop. What that means for actual timetables, it's hard to say. She's already on the far end of things in terms of survival rate. She's not outwardly suffering, but...

Overall, though, it's just weird to see this ball of joy and life and learning in Dash contrasted with a woman who is a shell of what she used to be. All the old concerns and complaints about losing out on a mother figure to bounce everything off of still applies, and as Dash becomes more aware, it becomes more of a thought about what to shield him from, what he gets out of this, and so on. It's all so strange.

Bu we keep persevering. We have to.
Posted by Jeff Raymond at 7:30 AM