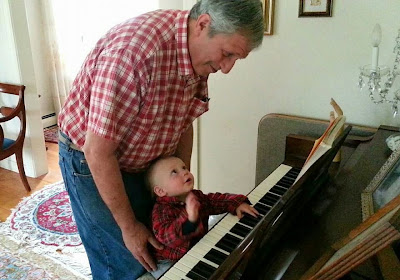 In an effort to kickstart my brain and this blog and to not miss out on pretty much every awesome achievement of my son, I'm going to do another monthlong project. I apologize in advance for those who will tire of this by day four.

Anyway, with so many people coming to my life so much later in my life than back when I was in high school and college, it's a little known fact that I actually went to college for music education to start out. I wasn't a very good music major, truth be told, but I didn't lose all my abilities either. I was still a good singer for a while, can still play a variety of instruments (although my guitars have been collecting dust for quite a while now), and I'm still fairly musically inclined.

Everything I know about babies tells me that babies responding to music is not exactly a special or unique situation, but I'm constantly amused at how well Dash has taken to music.


If Dash has a favorite song these days, it's Leyla McCalla's "Rose Marie," a take on a more traditional Haitian folk song. I'm not sure what it is about the song that gets him going, but whether it's a live version Ann finds on YouTube while in the woods of Maine or the album off of Spotify, he will stop what he's doing and start doing whatever dance that is that he's doing, then flapping the arms, and then playing percussion on a nearby lap. It's pretty hilarious.

The first song he ever really dug was Katy B's "5am", a Europop song that's amusing on its own. I've resorted to starting a Spotify playlist specifically for songs he loves, and it ranges from indie rock like "Waiting on You" by Future Islands all the way to actual children's songs like "We Are the Dinosaurs" by Laurie Berkner.


I wish I could say he has great taste, but alas, he also has a toy motorcycle that plays Smash Mouth's "Walking on the Sun" that also gets him excited. Meh, we all have our heretical musical tastes, right?


That still doesn't excuse his dancing with Mickey Mouse with this toy, but hey. 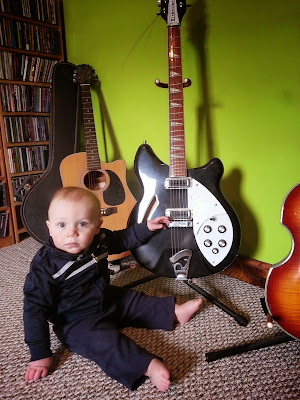 He's been going to a toddler group music class in town and apparently really enjoys guitars and rhythm sticks, so I guess it's time for me to learn some songs again, but for now he seems to just be letting the music speak to him a bit. Nothing wrong with that.
Posted by Jeff Raymond at 7:30 AM