The Glitch in Sleep 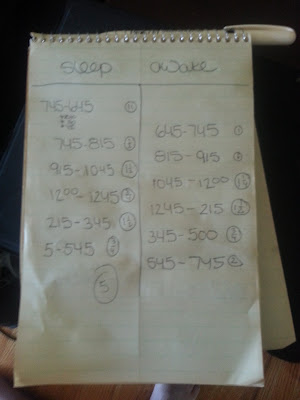 One interesting, but not so detailed, point I didn't make last month was about how sleep was hard for Dash. We couldn't quite figure out why - we rarely got full nights out of him as is, and he didn't nap a ton. When we got him down, it was with the yoga ball all bundled up as opposed to an easy peasy put him down type thing.

This is when Ann realized that we were doing it all wrong.

Apparently, babies have very specific sleep cycles. They sleep 45 minutes at a time, usually for two cycles, and then they're up for an hour, except for the 5-7 hours at night. Given that Dash is exclusively breastfed, it means he's up at night more often, but that's not too troubling for Ann. Do you think we figured that out? Of course not! We'll just keep Dash up until he's tired, right? And then toss him in a swing in the same room as us and then be puzzled that his nap is only a half hour long. And then he'll just stay up again, right?! He'll sleep when he's tired!

Ooh, boy, we messed this one up.

I can't remember at this point when or how Ann figured out that we were doing this all wrong, but we immediately moved the swing into his room, set up the monitor, made the room as dark as possible, and started working around that schedule. Dash was like a whole different baby within a day - babbling and cooing and super-active, and hardly fussy at all except when we perhaps kept him up a little too long. At night, he'd sleep-eat on Ann a couple times and it wouldn't be a problem - he effectively sleeps from 8 to 5 at night, which is a huge improvement from keeping him up until 10 or 11 and crossing our fingers that we'd get 6 hours out of him. Ann got to the point where she was mapping his sleep/wake time to the minute, which is both insane and awesome.

Not our best moment.

So, of course, the last three days have been a bit rocky after about 10 days of a really great, solid routine. Ann left me alone with Dash twice, and both times were just strange sleep things that I attributed more to me not being Ann than anything else, but he was a complete and total pain for Ann today, too. She then emails me this, regarding a sleep regression many babies go through once they hit four months, attributing to a shift in sleep cycles (check), more engagement in the world around them (check), and growth spurts (check). I don't know how people parent without an internet to help them out, because this is absolutely ridiculous. I'm positive I'd never have figured this out on my own, and we're actually really on top of things.

So we're already into a new era of sleepytimes for Dashypants, but I'm more confident now than I have been in days that we'll figure it out. The sooner that kid learns how to talk, the better. God knows we're certainly slow on the uptake...
Posted by Jeff Raymond at 1:51 PM