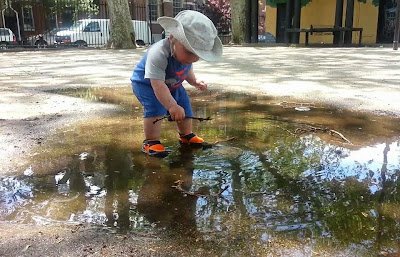 As a final note about Dash's weekend in Philly, Ann, along with this picture and a story, made me realize (or re-realize, really) that we're totally going to end up being those parents.

So his is Dash playing in a puddle. He apparently spent a ridiculous amount of time playing in this puddle, and it was a hot weekend and Ann had his water shoes, so why not? The plan was to go to a little sprinkler park or whatever, but it's too early for that to be open, but there are puddles, so why not play in them?

Ann noticed that there were other parents there with their kids, and Dash was pretty much flying solo in the puddle. He's only one, why not, right? The thing is that we're almost always likely to be the types to say "yes" to these types of little adventures. Want to play in the dirt? Okay. Feel like carrying around a comically large flyswatter? Sure. There are limits to be set, yes, but there's a difference between a reasonable limit for the safety and security of a one year old or of something valuable, and there's setting a limit because you don't want to be bothered. We'd like to keep away from the latter as much as possible.

I don't know if it's the first time she's felt that way, though, but being "that parent" is a new kind of pressure, I suppose. With that said, it reminds me of what my mother had to do to, for example, allow me to get books that were "above my grade level" in the school library. It may have been a pain in the rear end for some people, but it's what was best, right? Dash playing in a puddle hurts no one, so in the puddle he'll play.

This will likely be frustrating in a few years. I might have to eat my words. For now, though?
Posted by Jeff Raymond at 7:30 AM