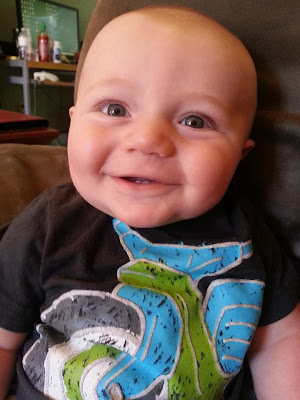 TEEF
Some random stuff that I've been sitting on for no good reason.

* Teething is the worst. I always used to get mad at the animals in the house for resorting to simple cries and barks and meows when they've been around human language their entire lives and can't just tell us they need food or want to go out or saw a shadow in the corner. Teething is definitely a traumatic experience for our little guy, and too often it's crying without knowing what to do, and then you have the guilt about giving him baby Tylenol even though it clearly works to help settle him down, and then you realize how silly that is, and yeah.

As seen in the picture above, he got his first two bottom teeth. We had his four month doctor's appointment on a Friday, the pediatrician couldn't find any teeth, but they were there on Saturday. We're...pretty sure his top ones are coming in as well at this point, but for the time being, it's just a lot of whining to go along with his otherwise awesome demeanor.

* This does mean that everything goes into his mouth. As someone who is a compulsive hand-washer, watching my child take anything within arms reach and bring it to his mouth is something that I've had to work on suppressing my gag reflex over. I keep telling myself that it's just a behavior he'll grow out of, and for now he's building up immunities, but seriously, dude, gross. I know you don't know where that's been, but I do.

* Dash's 5 monthaversary was this past week, so we did our normal picture: 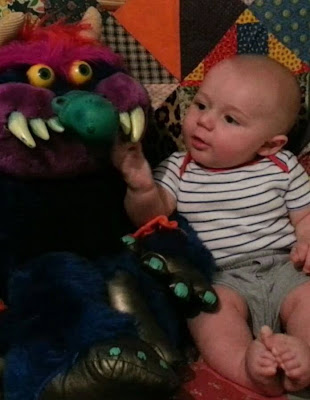 As you see, he's now actually noticing the My Favorite Monster that is his comparative example. By month six, I fully expect the photo to be of him devouring the doll's head.

* I went away for the first time from Dash. It's one thing to have Dash go to Maine and know that, at the end of the day, he's three hours away and if something came up that I absolutely needed to be there for, I could drive there. Going to Charlotte for four days was a difficult thing. Not so much while I was there, since I was very busy for most of it, but leaving and coming home? Just brutal. I didn't expect that.

I talked once about how I first knew I was a dad, and those moments come and go a lot, to be honest. I experience the world around me very strangely, and I'm still not really used to this whole father thing. But when I got out of the car at 7:45, and Ann and Dash were sitting in the yard, and Dash saw me get out of the car from 40 feet away and flashed that great, great smile? Might have gotten a little dusty.

The interesting point of Dash's development is here now, where he is super aware and super curious. Everything around him is interesting, is his toy, and should exist in his mouth. That alone is worth the price of admission, to see him notice things for the first time that were previously always there. What's great for me is that we're starting to get into little routines that I'm convinced he can expect. I grab his hands a certain way, and he reacts because he knows I'm about to make him do the cabbage patch. I look at him a certain way and get a little grin from him without even having to say a word. I know what words make him giggle, I know what actions I can do to make him laugh out loud, and he always has the biggest smile for me when he comes into a room I'm in. The hard part of having to deal with a baby that literally just existed to eat and sleep is now over, and we're actually having some fun now. We're not quite at the point where he can sit and read a book without inherently wanting it in his mouth, but we're so much closer. It's great. So great. 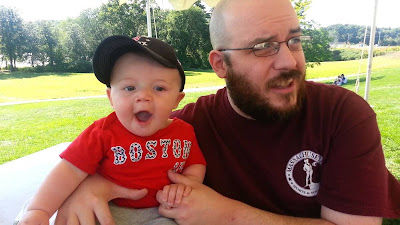 My friend Liz came up to visit for a real quick afternoon last week, and she repeated something she's told me a few times when I've talked to her about how I'm always surprised that Dash is so taken with me: "Your his father, of course he likes you." I didn't really get it for a long time, but I'm starting to get it now, and I get to see why parental dynamics happen so much. Ann gets the lion's share of the time with him - she doesn't work, I do. She takes care of Mom as well, I can't do as much. She breastfeeds, I have nothing to offer. I end up being the fun guy who isn't all business and doesn't have the toys, and I think I've fallen into a bit of a groove with him that works for us for the time being. It definitely helps with the parental guilt I tend to have, because it means I'm actually offering him something that he wants. My dynamic with my parents shifted over time - my father was my best friend for a while and Mom split between my brother being the baby/toddler and being the disciplinarian, then my mother and I started clicking really well on that intellectual level and my father took on the more disciplinary role. I can't imagine it was planned out that way, but it was what it was (and probably gives you all a lot of insight as to why this situation with my mother is so difficult for me), and now I see how it's happening with us. No matter how hard you want to balance the two out, things are just going to happen the way they happen. No use fighting it, I guess.

* A final story as this has gone pretty long. We've been trying for months to get my mother into an adult day care program to help take some of the load off and to get her the care we simply can't provide anymore. For the sake of brevity on what's really off-topic for this blog, the idea behind it is obviously to care for those who are ill, but with caregiver burnout in mind because it's cheaper to do a day thing than to do full-time care. It's one of those "why didn't they think of this decades ago" type things, but hey, it's there.

My mother starts that program today, and Ann and Dash are going to drop her off and get a better lay of the land. That part of it is not interesting as much as the part where Ann is really, really excited to take Dash and volunteer at the place with him. The elderly love kids and babies as is, and Dash has proven time and time again that he's a great sport when it comes to large groups and unfamiliar places (as long as the mariachi band isn't too loud), and the idea that one of Ann's first instincts is not only to bring Dash and volunteer a bit, but to be able to instill that sense of care and giving into Dash so early is...well...amazing. For as much as I talk about how much I love Dash, it's really how much more I love Ann. I never knew that the girl I met almost 10 years ago had this much to give to this many people. Other girls would have ran when they saw what they were marrying into with my mother, instead she showers her with love and with water, listen to her incomprehensible conversations and her seemingly coherent narratives, and even decides that she wants to help out when she can at the place we're sending my mother because we're increasingly incapable of helping her ourselves.

I know I'm going to try and be the best dad I can be, because the best mom I could ask for my kid happens to be my kid's mom. She makes me want to be better at it, and makes me want to make sure that Dash gets the life he deserves from parents who want him to be the best he can be. I married up, I lucked out, and not only does my mother and my family win as a result, but I think Dash hit the jackpot. 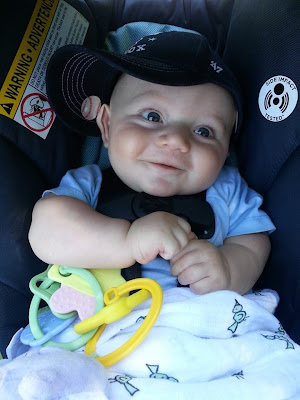 I'm starting to think he knows it, too.
Posted by Jeff Raymond at 7:30 AM