A random hodgepodge on the day of our child's birth

So Ann didn't want to be posting about stuff too much on the day of the birth, because social media is weird and we'd just end up replying to a ton of texts anyway, so just some random stuff. I wrote half of this on my phone as we waited for our little guy to come, you'll see the place it changes...

* We've been the talk of the local dodgeball league since the due date fell right at the end of the season and right near the playoffs. The running joke has been how the baby needs to come between the key times, so the baby coming the day after the season ends, six days before playoffs? So far so good, lil' spawn.

* Ann's water broke around 2am, I woke up about a half hour later. It was kind of cute how Ann was trying to be quiet so I could sleep.

* I dozed off for a few minutes and apparently missed the paramedics bringing a woman in who then had her baby within, like, five minutes. I hope she's okay, but my first thoughts were "if Ann screams like that..."

* Ann consistently asked for my input in this like drugs and such, as if I have any clue whatsoever. I realized at this point in the program that I was woefully unprepared for the entire process.

* Interestingly, they wouldn't let me be in for the epidural. Apparently, it made sense, as Ann admitted I would have been helpless, but still...

At this point, I stopped writing anything down for a few reasons. One, we got into the birth thing, and two, I think the whole labor story isn't really mine to tell. If Ann decides she wants to share, I'll keep it here for posterity's sake. If not, I'll share here in as much detail as I'm/we're comfortable with.

Regardless, 17 hours after our adventure started, we introduced Dashiell Clark into our little team: 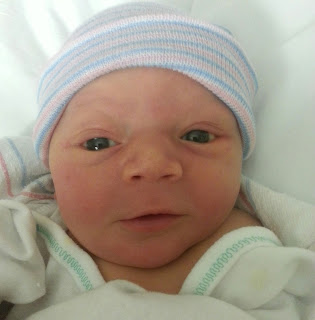 We spent two days at the hospital and came home mid-afternoon on Sunday. My next post will be about some of being at home this week with a newborn, and all the stuff that goes along with that.